The Power of a Story – Tim Hortons Advertising 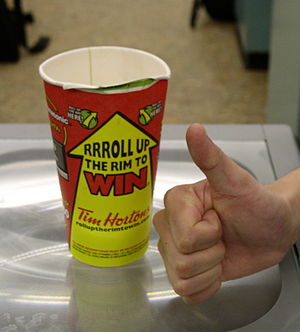 All around Canada people are wearing their red mitts and red hats glowing with National Pride. With the 2010 Winter Olympics underway, Canadians of all walks of life are showing their patriotic side. Tim Hortons, Canadas biggest Coffee and Bakery chain is one of Canadas greatest brands. Tim Hortons is known for its Hockey oriented commercials but has recently begun to implement advertising that shows Canadas diversity while showing the importance of family.

The most recent commercial from Tim Hortons shows an African man preparing for the arrival of his wife and two kids. After a touching moment at the airport we realize  that the man and his family have been separated for some time. As this scene comes to an end he hands his wife a cup of Tim Hortons Coffee and gives her and the kids some winter coats. Ultimately, the story is told to perfection – Here is the 90 second spot…

The Art of Storytelling

While this may seem a bit elementary to some, its an element that is often overlooked in advertisements trying to tell a story.  You have 30-140 seconds to make the viewers connect with the characters; its difficult to get them to connect with one – Why try two? In this Advertisement we are immediately introduced to the Husband/Father and after watching him we establish a connection. Once this connection is made our emotions are in the hands of the storyteller.

This advertisement does a great job at triggering emotions. From the response I seen on twitter and from the comments on YouTube, I’m sure some of you are probably in tears right now. Whether you can relate to the story or if you simply are touched by it, the story is powerful. There are eight basic universal emotions that a story can trigger; joy, surprise, acceptance, fear, anger, sadness, disgust, anticipation and anger. A story that is able to trigger any of these emotions has a strong possibility of being remembered as our emotions are directly related to chemicals in the brain.

A Climax Worth Waiting For

Sometimes Advertisers leave us expecting a big bang that they never deliver on. An advertisement that is able to take the short amount of time and tell a story and get across its message effectively is a story worth telling. The suspense builds up at the beginning of the ad when he purchases the jackets and then the coffee – The climax is when the doors open and he sees his family. This moment, is  what the audience was waiting for. Andresult its the most memorable part of the Ad.

Not a Story For Everyone

This Story wont resonate with everyone. But that’s the point. As soon as you start trying to be all things for all people you begin to slide more towards mediocrity than anything. The Story begins to be boring and we wonder whether or not we’ve heard it before. The story that Tim Hortons is telling with this Advertising is one that will resonate with people who appreciate the value of family and multiculturalism in Canada.

While Tim Hortons told a Great Story. Some would argue that any coffee shop could run this Ad effectively and trigger emotions. While I agree that any coffee shop could have replaced Tim Hortons in the Ad and triggered emotions; I don’t think that the story would be resonate as well. Seeing that Tim Hortons is one of Canadas most recognized brands; it has a long history with Canadian culture. Tim Hortons is also known for  positioning themselves as being a part of the family. For this reason, they can run this Ad in Canada better than any other coffee chain.

Whats your thoughts on the Ad? Did it resonate – Do you think Starbucks could do it?

That was a hell of a commercial.

Agreed… Do you think an American Brand (Starbucks) could pull it off in the US?

When I clicked that ad and watched it for the second time, it hit me no less. This time before the man was picking out winter coats I was teary, in anticipation of what was to come. This hits home for me based purely on my mind replacing that family with my own. Images rush into my head of picking up my Dad from the airport after being sent away for 6-12 months stints -“on course” as the military would say-. However I still enjoy the reference to the diverse culture, and the immigration that this country is founded on.… Read more »

Thats great, I appreciate you sharing your story, Corey. When its all said and done, I think people like you are exactly who Tim Hortons was targeting. While multiculturalism is a part of the advertisement the core message is “family.” This advertisement is more about the Tim Hortons brand and what it represents. Whether or not you'll go out and by a Tim Hortons coffee is just only part the big picture. Couldn't agree with you more that “Tim Hortons screams Canada without having to say a word.” They've done some great work in communities all around Canada and have… Read more »

Agreed, a lot of canadian commercials showing their patriotic side. Little bit of a advertising gimmic, but I enjoy it. One of the best commercials I've seen from Tim's

Its definitely becoming a gimic throughout the Olympics – But none the less. One that is working for a lot of the big brands putting them out there. Thanks for the Comment, I agree with you – Definitely one of the best commercials Tims has put out in a while.

As a Canadian woman who is in the process of sponsoring her West African husband, this commercial really hits home. This moment is what I am looking forward to, after the 18 months or so that Immigration Canada will put us through. (contrary to popular belief based on this commercial's YouTube comments, it is NOT easy for someone to immigrate here, even if they marry a Canadian!)I do not think it would have 1/10th the impact as a Starbucks commercial. This man has chosen to bring his family to the most incredible nation on earth, and he starts by giving… Read more »

Wow, thats great comment if I've ever seen one Laura! And an amazing story on top of everything else – Thanks for visiting the blog. The comments on the commercial definitely make it seem easy and knowing a few people who went through the process I know what they went through. I agree with your point about the impact being greater because its well, “Tims.” When someone walks into Starbucks I don't think they get an Patriotic feeling. With Tims however there's a connection between the brand and the Canadian culture. Appreciate your comment – Thanks for sharing your story… Read more »

[…] telling. He tells his stories them in a way that Picasso would paint – You could say he makes art with […]

Solid Points – Yet, All advertisements are made to sell something, to make money or to generate buzz. They do this by creating demand. To create demand you start by catering to peoples wants. People want to be good Canadians. People want to be Patriotic – especially during the Winter Olympics. There is no dishonesty in this Ad. They are giving people a chance to fulfill these wants. Every time you walk into a Tim Hortons you're taking part in the Canadian culture. This Ad is just reminder.

Could an American brand such as Starbucks pull it off in the US? Probably not, because Starbucks isn't nearly a part of national culture as Tim Hortons is in Canada. Is it emotionally exploitive of Tim Hortons appeal to being one of the first parts of Canadian culture? Absolutely not, because Tim's has become a part of Canadian culture. History is marked by corporations shaping and influencing culture, look at Canada, most of the land used to be owned by the Hudson's Bay Company – or how Ford shaped our neighbours to the south. Tim Hortons has become as much… Read more »

Wow, thats amazing Lucas… Definitely shows the influence Tim Hortons has had on our culture. I agree with you 100% in saying that Tims can't exploit the Canadian Culture because well….They're so deeply rooted within it.

Great points – Glad you stopped by…

This is a fantastic ad. Will it resonate with everyone? Maybe not, but what it will do is showcase a part of Canadian culture that is indisputable… That because of our acceptance of other races/cultures, we can bring people together, we can bring families together. There is a tight link to Tim Horton's as a brand as it is a well known Canadian brand, but also because Tim Horton's is an integral part of the Canadian communities. The link to what we do as Canadians in terms of diversity and welcoming immigration is clear with Tim Horton's. And, that is… Read more »

Thanks for the comment Judi! While I'm not so familiar with all of those American brands I'm pretty confident Walgreens could pull of an emotional ad. I think your idea about Starbucks using this type of Ad but using the internet/family connection is interesting. I have a feeling that an Ad like that could resonate with a lot of people from US to Canada. I haven't gone into a Starbucks in quite some time without seeing someone skyping with a friend or relative.

Thanks again for the comment – Great thoughts and points.

McDonalds Fights Dirty as they Fight for their Coffee Crown

[…] knows that Tim Hortons owns the Coffee Market in Canada. They realize that the only way they can compete is to grab their users attention and give them […]

[…] out advertisements because the majority of them are pointless and never compare to an ad that is memorable. Some would argue that the reason they don’t remember has nothing to do with the Ads, and […]

Emotional ads are becoming an epidemic.

[…] filled advertising is becoming more and more common in today’s market. From the Tim Horton’s advertisement that brought tears to many Canadians to this one. Emotional ads are becoming an […]

[…] A powerful story has always been one of the most effective ways to find marketing success. As marketers, we purposely position our messages in ways that will evoke a variety of different emotions. To be blunt, Marketers love it when consumers are unhappy. Unhappiness is actually one of the driving factors behind successful marketing. […]

Hi there, as a loyal tim hortons coffee drinker I was a bit taken back by Tim’s recent ad featuring various tim’s across this great country, the ad appears to ignore some of our great provinces while other provinces are featured more than once. I am canadian and I live in Halifax, Nova Scotia and Nova Scotia is not mentioned nor is Prince Edward Island. I felt as though we do not matter here in Nova Scotia and PEI.